Daniel Linden (M.M. from the New England Conservatory in Trombone Performance) has toured the U.S., Europe and Asia with orchestras, opera companies and rock bands. He regularly plays in Broadway and Off Broadway productions and has made many recordings in classical, jazz and pop/world genres. He has performed on Fox News, CBS, MSNBC and the Artie Lange Show. Festivals Daniel has played include the Montreal Jazz Festival, Lincoln Center Out of Doors and Bang on a Can Marathon. Active in world music and jazz, Daniel has worked with David Byrne, Slavic Soul Party, Asphalt Orchestra, The Ed Palermo Big Band, The Gregorio Uribe Big Band and Frank London’s Klezmer Brass All Stars. Daniel has taught trombone at Brandeis University and is a teaching artist for Carnegie Hall. He currently holds the trombone chair of Fiddler On the Roof in Yiddish Off Broadway at Stage 42.

Daniel also writes and records songs under the name Hoosac.

enjoy a collection of projects from Daniel's portfolio

Thank you for visiting!

Daniel has been a part of Carnegie Hall’s Musical Connections program:

by Lynne Bond and Bettina Covo.

Read the full article on UpbeatNYC by clicking here

Music has to be recognized as an agent of social development in the highest sense, because it transmits the highest values – solidarity, harmony, mutual compassion. And it has the ability to unite an entire community and to express sublime feelings.” 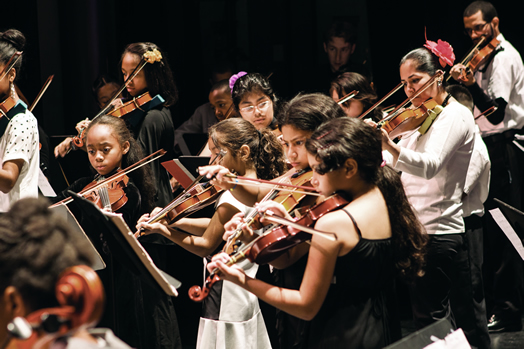 The importance of providing arts education – including music – for our children is immeasurable. And until recently, music education was accessible to every public school student in the United States. Sadly, this is no longer true. With the erosion of arts education, many parents are forced to find alternatives if they want to expose their children to music lessons. The good news is that free or low-cost options do exist. Local youth orchestras such as the New York Youth Symphony provide free instruction for highly-talented, well-trained students. The newly formed National Youth Orchestra, organized by Sir Clive Gillison at Carnegie Hall, auditions the crème de la crème of music students from around the country to perform and tour with different international conductors, again free of charge for the students.

But both of those youth orchestras are geared to students with families who understand the importance of music education and who also have the resources to give their children every opportunity available. Many kids don’t have those same advantages, but they still deserve the chance to learn music. There is an alternative for these students – youth orchestras based on the El Sistema model.

In 1975, José Antonio Abreu, a Venezuelan economist and musician, had a vision – a regional youth orchestra for underprivileged children from the inner cities of South America. Abreu believed that his orchestra would not only be a shining example of the formative power of music, but could eventually initiate social change. His vision was realized when he formed the Simón Bolívar Youth Orchestra, made up of children from the urban slums of Venezuela. And so began “El Sistema” (which means “The System” in Spanish).

NYTIMES: Shimmery Orchestrations, With a Tinge of Philip Glass

Jherek Bischoff, a songwriter and arranger from Seattle, made his 2012 debut album, “Composed” (Brassland), with low-budget digital diligence. He built the album’s orchestral arrangements by recording one instrument at a time on his laptop. He then drew on some impressive contacts to add vocals, among themDavid Byrne, Caetano Veloso, Nika Danilova (better known as Zola Jesus), Zac Pennington of Parenthetical Girls and the indie-pop songwriter Mirah Zeitlyn, along with drumming from Greg Saunier of Deerhoof. They recognized a fellow pop experimenter.

Mr. Bischoff reassembled the songs in real time when he performed on Wednesday night at St. Ann’s Warehouse in Brooklyn, starting a two-night stand. Mr. Veloso was not on hand, but the other singers and Mr. Saunier were, along with the songwriter Sondre Lerche. The chamber orchestra Contemporaneous, conducted by David Bloom, played Mr. Bischoff’s lapidary arrangements of songs from“Composed” and from his guest songwriters. Mr. Bischoff himself played ukulele, often picking lacework patterns, or electric bass.

Mr. Bischoff works in territory explored recently by Sufjan Stevens and, decades back, by Van Dyke Parks. The orchestra is a full partner in his songs, conjuring bygone luxury, pastoral retreats or suspenseful reveries. Mr. Bischoff is fond of waltzes and hints of waltzes, of fluttering trills, of sweeping Romantic crescendos and of sighing violin countermelodies. “Eyes,” featuring Mr. Byrne, was a plush, string-laden bolero. In “Young & Lovely,” sung by Mr. Pennington and Sam Mickens, the strings had repeating, Philip Glass-like figures, but they rode a brisk hoedown beat and were answered by mocking trombone.

Mr. Bischoff listens widely. The concert included his arrangements of a piece by the Congolese band Konono No. 1, which plays electrified thumb pianos, and of a wistful 1960s pop-folk song, “Counting,” by Bob Lind. A new song with Ms. Zeitlyn, “Country of the Future,” had a breezy carnival

Continue Reading on the NYtimes.com

The 81 musicians and singers who were about to give the premiere of “Sila: The Breath of the World,” an alluring, mystical new work by the American composer John Luther Adams conceived for performance outdoors in Lincoln Center’s Hearst Plaza, began to take their assigned places early on Friday evening. It was quite a procession.

A roster of 16 string players lined up in a row on the edge of the tree grove facing the Paul Milstein Pool and Terrace, everyone standing except for four cellists who sat on the stone bench that borders the grove. A large group of woodwind and brass players walked up the slope of Illumination Lawn, which gave them an elevated vantage point. Most of the 17 participating percussionists stood near sets of timpani, drums and various instruments that had already been placed around the pool.

Then, in a bold touch, 16 members of the impressive contemporary music choir the Crossing — the women in loose, long black dresses; the men in black shirts and pants — waded right into the pool, their feet protected by black water socks with tough rubber soles, popular with kayakers. During the performance, they sloshed slowly around the shallow pool using black megaphones to help their high, delicate tones carry through the space. This is the kind of thing aspiring singers are not typically prepared for in music schools. But the choristers were palpably involved throughout the work.

Lincoln Center commissioned “Sila” jointly for the Mostly Mozart Festival and the Out of Doors series. The center’s security officers estimated the crowd that attended this free event, the first of two performances, at 2,500. Many people listened from the shaded grove; most, though, either stood or sat right on the terrace surrounding the pool. Everyone was invited to move around during the performance and hear the piece from different acoustical angles.

One goal of the ambitious $1.2 billion renovation of Lincoln Center, which was completed in 2012, was to make the campus more open and inviting, a place people would want to hang out. With this piece, Mr. Adams has revealed Hearst Plaza to be an exciting performance space.

He developed a strong environmental consciousness from his decades-long residency in Alaska and that sensibility pervades his music. In May, his Pulitzer Prize-winning orchestra work, “Become Ocean,” which evokes the heaving undercurrents of the sea, was given a triumphant New York premiere in a concert at Carnegie Hall by the Seattle Symphony. “Sila” is closer in concept to “Inuksuit,” another of Mr. Adams’s works intended for performance outdoors, which I heard at the Ojai Festival in California in 2012.

Yet, unlike that work, “Sila” is a meticulously orchestrated score, though the way its elements unfold and the length of each gesture will vary with each performance. It can be played by anywhere from 16 to 80 or so performers; it is intended to last 60 to 70 minutes. In a brief interview before Friday’s concert, during which Mr. Adams showed me the score, he said, “I’m still trying to learn the piece.”

March 1, 2014
NPR’s New Sounds’ piece on bands who have written Pixies covers, and featured the recording I did with Asphalt Orchestra. Listen here:
or visit: http://www.wnyc.org/story/pixies-new-sounds-style/

The Bang on a Can Marathon, With Steroidal Energy

From Roars to Rhythmic Mallets, a Day for Savoring Exploration The Bang on a Can Marathon, With Steroidal Energy
By ZACHARY WOOLFEJUNE 23, 2014

All in all, it’s an irresistible show, whatever the quality of the music. And with Sunday’s consistently excellent performances, it was possible to judge that music on its own terms. So Percussion lavished its talents on Bryce Dessner’s intensely pretty, utterly inert “Music for Wood and Strings.” The ensemble Contemporaneous attacked, with passion, the syrupy, listless lyricism of selections from Jherek Bischoff’s “Cistern.”

Read the entire article on the NYtimes.com website here

Thank you for visiting…

All questions, comments & inquires are welcomed!